A CITY OF COMINGS AND GOINGS

A one-week studio investigating the different aspects of migration in Rotterdam's Superdiverse Neighbourhood Afrikaanderwijk, with Crimson Historians & Urbanists, that took place from 15 - 19 November 2021. 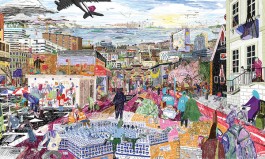 Our cities are increasingly defined by the dynamics of temporary inhabitants. Whether we are rich expats, hard working labour migrants, young international students or refugees. Climate change, armed conflicts, oppressive governments and a globalised economy keep us constantly on the move.

Most recently we are confronted with the grim images of the confrontation between migrants and ‘Fort Europe.’ We see thousands of people crossing the Mediterranean Sea in search for a better future. Refugee camps in Europe and the middle east are becoming almost permanent settlements. At the same time, we see the fruitful interaction between students from all around the world in university towns like Delft or Cambridge and we see Turkish or African entrepreneurs breathe new life into abandoned shopping centres or neighbourhoods in the outskirts of cities like Brussel, Manchester or Rotterdam.

But despite how it might come across in the heated public debate since the ‘refugee crisis’ of 2015, Migration is not fundamentally more important now, in our own era, than it was in the past. When looking further back, we have to conclude that migration is a fundamental phenomenon in the history of mankind and has always been influential in the development of our cities. Refugees and fortune seekers, artists and workers, poor and rich travelers have always created cities and settlements, influenced culture and shaped our economies. And, just as it does now, migration has caused tension and even upheaval, has contributed to exploitation and inequality and has caused political and social polarization. To move past the current debate and polarised positions, we proposed to zoom out of space and time, and to view migration as a general phenomenon as to bring into view the similarities and shared needs of migrant groups instead of their obvious differences. Viewed separately, their problems are driving us apart and, moreover, can rarely be adequately solved.

During this studio we looked at the city of Rotterdam in terms of migration. Because of its port and its connection with the rest of the globe, Rotterdam has attracted people from all over the world for centuries already. Nowadays over 170 different nationalities call it their home and the population has become so diverse that Rotterdam has become part of a worldwide family of ‘majority-minority’ cities - cities in which more than half of the population has a migration background. The focus of this studio will therefor go beyond the usual categories of ‘migrants’ vs. ‘natives’ and look at migration as a shared identity of nearly all citizens: From those who just arrived, to others who have been there for generations, from those migrating from the Dutch countryside to the city, to those that have travelled the oceans from other continents. To transcend the ‘us and them’ categories that dominate urban policies, we will look at the city through the lens of ‘superdiversity’. This term points at the complexity of identities to which migrants and natives might belong, instead of just those of nationality or religion. A contemporary citizen in a superdiverse world might belong to several communities at once, the city being much more a complex tapestry of layered identities than a zoning according to ethnic or class lines.

Afrikaanderwijk
Building upon the research by Crimson Historians & Urbanists, which resulted in the publication “A City of Comings and Goings” (2018) and an exhibition at the 2018 Venice Architecture Biennale, we carefully investigated different spatial dimensions of migration in Rotterdam. We did so by focusing on the Afrikaanderwijk – a working-class neighbourhood on the southern bank of the city, which started out as a hub for the first generation of harbour workers who came from the Dutch countryside around 1900. Later, in the nineteen seventies the area became home to a large Turkish community and throughout time it has developed into a Superdiverse neighbourhood with dozens of different identities. Fifteen years ago in 2007, Crimson worked on a research project on the Afrikaanderwijk called ‘Sociologica.’ The area was back then, considered by the municipality and the social housing corporations to be a problematic neighbourhood due to mostly social and demographic data. Since 2007 numerous plans and a plethora of social, physical and art projects were initiated and developed to counter the negative trends in the neighbourhood. By now, most of these plans have been executed: a new neighbourhood was built adjacent to Afrikaanderwijk (‘Parkwijk’), social and artistic projects were created to strengthened communities, and the controversial demolition of the Tweebosbuurt has taken place, displacing a few hundred inhabitants of social housing. A result of this period is that the Afrikaanderwijk has come to be known as the “frontline of gentrification”.

Building upon the ‘Sociologica’ survey by Crimson of 2007, we returned to the area and took a close look at the possible connection between urban planning and the social dynamics of superdiversity. A combination of quantitative, data driven research and qualitative research through interviews and news articles, helped us to not just look at the current situation, but also to get a better understanding of what happened over the past 15 years. What effects did these measures and projects have on the migration in and out of the Afrikaanderwijk. Who left and who came in. Who moved within the district (upward social mobility). How the demographic and ethnic make-up changed. And how  the changes reflect in the social and commercial amenities of the district, be it the shops, art places or the famous market.

We’ll used newspaper clip­pings, maps, interviews, and all possible means to get an as detailed as possible understanding of migration in the Afrikaanderwijk, its traces, manifestations, and influences on the neighbourhood. 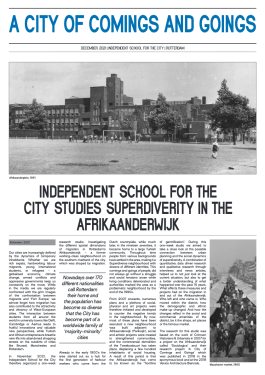 The findings of this course are translated in a City of Comings and Goings newspaper, which can be downloaded here. 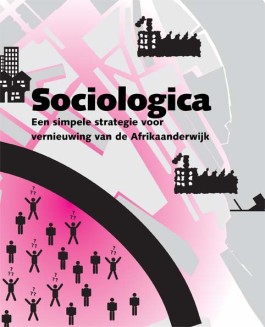