2,5° City: life in an extreme climate

A two-week studio exploring the impact of 2,5 degree temperature rise on life in the city, taking place in April 2023 - More info soon 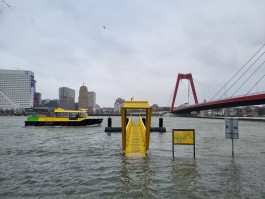 Cities all around the world, have the ambition to become green, sustainable and resilient. We see projects being developed to transform car-dominated cities into attractive and green environments for all their inhabitants, new forms of energy production are developed to power our houses and industries, and various measures are taken to deal with sea-level rise. But is it enough?

Climate scientists have predicted that if we continue at the current pace with climate measures, we will still end up on a planet that is between 2° and 3° hotter at the end of this century. The rising temperature will probably cause extreme weather phenomena, substantial sea level rising, biodiversity loss, food insecurity, large migration streams, social upheaval and political reactions. How will our offspring live in these new unmapped circumstances, how will their cities work, how will their life feel?

In this studio we will map out the predicted effects of temperature rise on the Netherlands, on the City of Rotterdam and on a number of very specific places in the city. After exploring these effects, we will then use our collective knowledge and that of our guest speakers and scientific literature, to imagine how we can mitigate the negative effects of global climate change and what is needed to make life livable in a city that suffers its consequences.

Will we need big infrastructural works to defend our nearly submerged cities? Will we have to find new sources of food? How will we keep the city from turning into a large oven in summer? Will we need new forms of politics to be able to absorb the waves of migration caused by climate change? Will we create new forms of solidarity and cooperation under pressure of the circumstances?

We hope to strike a balance between panic and optimism, allowing ourselves to dream about brilliant inventions at the end of this century, but also to be brutally realist about the new conditions. The result is a manual for our children and grandchildren to apply to their city and make it a good and safe place to live, so that they at least will not say that we did nothing.