CRIME As PART OF A GLOBAL NETWORK 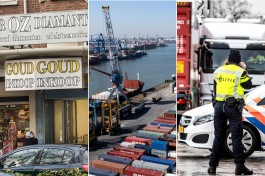 In the recent drug-related crime wave in the Netherlands, the port of Rotterdam plays a significant role as the import and export of drugs to Europe. In industrial areas on the periphery of the city, garages are combined with prostitution and human trafficking. These areas are on the outskirts of the city or even far beyond, invisible to the average city dweller. At the same time we see shops opening up without any commercial perspective and mainly used for laundering money. We will be mapping and visualizing this aspect of Rotterdam to make it part of the narrative of the city.

This studio is part of our intensive three-month programme on contemporary urbanism 'Dirty Old Town', but can also be taken separately. More info will follow soon.