A unique 12-week education programme, dealing with Climate Change, Migration and Crime in relation to our urban surroundings, starting on 31 January 2022.
Apply before 01 November 2021 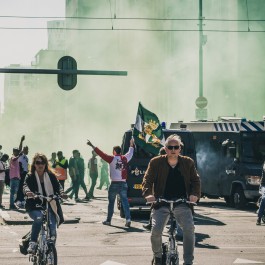 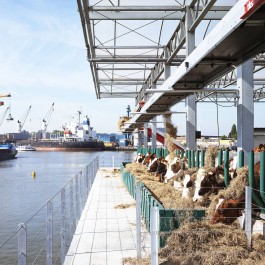 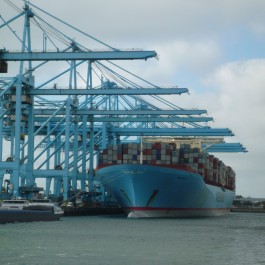 Starting on 31 January 2022, this intensive 12week course in contemporary urbanism takes the modern city as its subject and Rotterdam as its testing ground. It will explore the urban dynamics by bringing together different disciplines from historical research to artistic expression.

Participants in the programme will delve into the inescapable contradictions and complexities of the contemporary city. Using Rotterdam as a pars pro toto for many other cities in the world, we’ll be looking beyond its current popularity and trying to see the city as it really is, and as we can imagine it to become. Collectively we’ll explore the opportunities and challenges that lie ahead of us, but also look explicitly at the character of the city. This is not only defined by its trendy restaurants and iconic buildings, but also by its sharp edges. It's a place that can be old, new, dirty and beautiful at the same time. It is this complexity that we love, and which simultaneously poses challenges for our city.

This intensive programme includes a series of lectures, excursions and workshops focusing on specific research methods and pressing social issues such as Climate, Migration, Crime and Inequality in relation to our urban surroundings. Participating in the programme gives you the opportunity to meet a diverse team of urban specialists, designers and researchers. You’ll work together in a community of learning where you will have the freedom to deepen your knowledge and to develop your own position towards the pressing urban issues of our time.

WK 1-2 GENERAL INTRODUCTION (31 JAN - 11 FEB 2022)
During the first two weeks, participants will be introduced to the School and to the city of Rotterdam. Through expeditions and lectures, we will look at the city from various perspectives and become familiar with different disciplines and crafts. You will explore the physical but also the invisible realities of the urban landscape, andwill be introduced to the main tutors of the School, whose diverse backgrounds, works, professional experience and opinions will sharpen your own professional position and help you navigate the rest of the programme.

Afterwards, we'll dive into three themes that are pre-eminent among the characteristics of Rotterdam and are linked to its historic origins as an industrial city and a port, a spider within an international web. These three themes form the backbone of the course, also in their mutual relations:

WK 3-4  THEMATIC WORKSHOP #1: LIVING IN THE SUPERDIVERSE CITY (14 - 25 FEB 2022)
Because of the port and its connection with the rest of the globe, Rotterdam has attracted people from all over the world for decades already. Nowadays over 170 different nationalities call the city their home. The population has become so diverse that Rotterdam has become part of a worldwide family of Majority-Minority cities - cities in which more than half of the population has a migration background. And, not just the the amount of nationalities has increased: as generations pass, also the diversity within the different migrant groups has become increasingly complex. This increased diversity, or Superdiversity, makes the city interesting, dynamic and attractive, but also creates social tensions. There are huge differences in income, housing situation and development opportunities between the various groups in the city. The spatial spread across the city is also beginning to show signs of segregation. During these two weeks we aim to understand this Superdiverse reality through photography in combination with participatory research: observation, walks and talks. We ask you to step up to people and engage with them in conversation about what they are doing and how they are living, and to capture hidden, unlocked experiences and phenomena about their life. Can we find out together what binds different groups? - This workshop is also offered as a stand-alone course. More info soon.

WK5-6 THEMATIC WORKSHOP #2: ACCESSIBILITY AND CRIME (02 - 09 MAR 2022)
In the recent drug-related crime wave in the Netherlands, the port of Rotterdam plays a significant role as the import and export harbor of drugs. In industrial areas on the periphery of the city, garages are combined with prostitution and human trafficking. These areas are on the outskirts of the city or even far beyond, invisible to the average city dweller. We will be mapping and visualizing this aspect of Rotterdam to make it part of the narrative of the city. - This workshop is also offered as a stand-alone course. More info soon.

WK 7-8 THEMATIC WORKSHOP #3: CITIZENS OF THE ANTHROPOCENE (14 - 25 MAR 2022)
Just as many cities around the world, Rotterdam has the ambition to become green, sustainable and resilient. All around the city we see projects being developed to transform this car-dominated city, into an attractive and green environment for all its in habitants, while simultaneously aiming to increase the awareness about climate change and sea-level rise. But is it enough? During this thematic block, we’ll dive into the Anthropocene – the geological era marking the dominant human impact on the Earth systems. Trough four philosophical viewpoints that one can have of this age of mankind, and while confronting the causes and effects of climate change, biodiversity loss, land use change et cetera, we will try to bring the effects of our actions close to home, literally and painfully. We’ll use our collective knowledge and imagination to improve, layer and enrich our worldview, to understand our own cities and countries and to develop our own position vis a vis the new normal of the and how we as humans need or want to act. - This workshop is also offered as a stand-alone course. More info soon.

WK9 TAKE POSITION (28 MAR - 01 APR 2022)
Time to organise your thoughts and reflect on the ideas and stories that emerged during the previous weeks. Which conflicts did you discovered? What issue or problem do you want to engage with? What position do you want to take as an urban professional? And how do you see the future of the city? Through various exercises and conversations with critical minds, you will both look back and ahead.

WK10 - 11 STRATEGIZE (04 - 15 APR 2022)
During these two weeks, you will take the step from research findings to strategy and make plans in order to reach your ultimate goal. Use the means you need for the goal you have in mind: you can write an article, make a short movie, design an object or a campaign, plan a landscape or plan a revolution. As long as it is in line with your position and puts your research results to the best use.

WK 12 PRESENT (18 - 22 APR 2022)
Time to show your work to the world! The Independent School will organise a final collective event and invite the leaders of the City and other professionals to see what has been produced and to react to it. We’ll show Rotterdam what we’ve got and finish this intensive programme with a bang!

You can apply for this densely packed 12-week programme by sending a motivation (1A4), your CV (max 2mb) and examples of previous work (max 8mb/5 pages) to info@schoolforthecity.nl before 01 November 2021

The Dirty Old Town programme fits within the 90 days period of validity of a tourist visa to the Netherlands. It is based on a five-day work week filled with workshops, lectures and field trips.

This course needs a minimum amount of 10 participants and has a maximum of 20 participants. Applicants will be informed in the first week of November 2021 whether they have been accepted to the programme.

Once unknown and misunderstood, the city of Rotterdam is now more popular than ever. Iconic buildings, bars and restaurants pop up all around town, making it an attractive destination for tourists, students and other visitors from all around the world. The population is growing, house prices are on the rise and the development of new urban districts is in full swing. In less than two decades the city has changed from a harsh and grim, yet poetic, place to a smooth and attractive city that is loved and today is even called hospitable and pleasant.

But no matter how charming the city presents itself, no matter how modern or popular it is, it owes - contrarily enough – a large part of its appeal to its sharp edges; its attraction lies not exactly in being able to offer what you are looking for, but in what it confronts you with unexpectedly: the surprises, the jagged fringes and the opportunities they bring. The city is a real city because it always offers more than what you asked for. It is the darker side that makes her more than a small town. The city is old, dirty and beautiful at the same time. That’s why we love her, why we want to nurture her.

Yet, at the same time, there are still many serious issues in this city that are problematic. Just like other world cities, Rotterdam has to come to terms with social inequality and spatial segregation, with drug-related crime and human trafficking, with pollution and environmental degradation. The city has been part of a global network since her origins and shares these issues with cities worldwide such as Hong Kong or Baltimore, Athens or Accra. Her problems are not unique, but can we devise unique strategies to solve them?

Scroll down for more info

The first edition of Dirty Old Town took place in the Winter of 2021. This video gives you an impression of what to expect. Also take a look here to see what the previous participates produced.

The course will use the Independent School for the City’s methodological triad of Research, Stories and Strategies.

#RESEARCH
Through lectures by the best experts, precisely planned excursions through Rotterdam and mapping exercises, we will uncover the invisible layers of the city, look at sites through various lenses and collect the data needed to take a position vis-à-vis the city’s challenges. We will look at the city as a palimpsest of different systems, ideas, infrastructures, policies and ideologies. Each time, we 'll consider Rotterdam as a means to get a close-up view of global trends and networks.

#STORIES
To share our position on the city with others, in order to turn it into action, we need to construct a strong narrative. That is the subject of the second week dedicated to each theme. Lectures and workshops will be held on the different formats and techniques, the different languages and methods with which a story can be told. From the written manifesto to the exhibition, the political campaign to the utopian plan, the movie to the historical essay. We will discover how a narrative approach not only carries the message we want to share but will shape and influence it too. Through the stories we tell, we start to change the reality of our cities.

#STRATEGIES
The last part of the programme is dedicated to translating insights and stories into strategies and concrete action. We take a broad view of what constitutes action. A precisely written and timed manifesto could have as much influence as a government funded masterplan; a tactical policy change can have as much impact on the shape of a street as an iconic piece of architecture. We will choose a number of sites in Rotterdam and subject these to our transformational strategies and to the tactical interventions that they produce. The programme will conclude with an exhibition and a conversations with the officials, planners and politicians who have been entrusted with Rotterdam’s future. 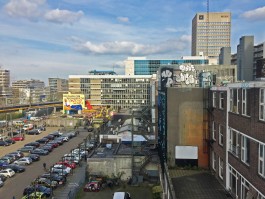 Want to know more about our other educational activities? Check out all our upcoming courses