Can a city ever escape its past? That was the question asked in this studio taking place from 25 - 29 November 2019 at the Independent School for the City. In the city of Rotterdam, as in many cities in the west, the transition to a green economy fuelled by renewable energy sources, is advertised everywhere. At the same time Rotterdam is still the main hub for the import of coal, oil and natural gas of northern Europe. Its economy is mostly dependent on the import, export and refinement of fossil fuel. An industrial port city like Rotterdam has invested so much in the infrastructure of fossil fuel and its economy is so dependent on it, that a swift transition would make the city collapse, and also bring down large parts of the Dutch and even European economy with it. 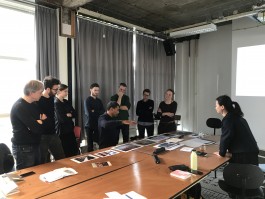 Ruben Dario Kleimeer talking about his work with the participants 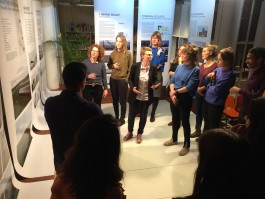 Exhibition opening of the final results

The scale and depth of Rotterdam’s addiction to coal, oil and gas becomes dramatically visible in the alienating landscapes of the coal terminals in the harbour area, in the wondrous skylines of the petrochemical refineries, in the immense tankerships docking at the harbour and the titanic scale of the pipes and installations pumping gas into the European mainland. The presence of the fossil economy is not limited to the port and industrial zones, but is also very much present in the daily life of the city itself.

We see fossil in the hundreds of thousands of cars buzzing through the suburbs, in the office buildings filled with fossil fuel related service industry, in the riverboats poisoning the air and the water and in the short distance flights departing from the airport. This all stands in huge contrast with the promotion of the circular economy, renewable energy, green economy with which the city associates itself.

The incongruence between the landscape of a fossil city, and the imagery of a clean, green city signifies a worrying reality. Rotterdam is dependent on something of which the end date is swiftly approaching but the city has not yet invested in real alternatives.

The landscapes and signs of Fossil Rotterdam were the subject of a week-long studio. With this course we wanted to make something that is invisible from the official imagery of the city visible again. We wanted to confront the city with its own reality, perhaps with its own impending demise, in order to force a debate. Guided by photographer Ruben Dario Kleimeer and Crimson Historians and Urbanists, the participants have documented and visualized the landscape of fossil energy and economy in the Rotterdam area. The main result of the studio was presented on 7 panels, each showing the work of one of the participants. Seen together, they present a honest portrait of a side of our western European economy that, even if it is being obscured from view, still dominates the way we live and breathe.

This studio was organised in collaboration with Rubén Dario Kleimeer - an artist from Rotterdam who depicts the urban landscape and the public realm. He uses the medium photography to analyse and better understand urban spaces. With the gaze of an urban ethnographer, a researcher of spatial and social contexts, he explores the built environment in which we live, work and dwell. Other contributors to the studio were: Ewout Dorman, Mike Emmerik, Michelle Provoost, Gerjan Streng and Wouter Vanstiphout 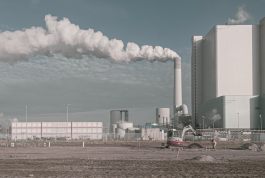