A weekend on spatial strategies for alternative forms of living together with Het Nieuwe Instituut. This event is postponed until further notice 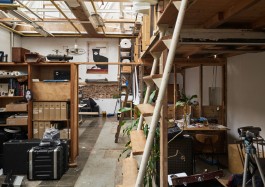 As the housing movement is gaining new momentum, Het Nieuwe Instituut and the Independent School for the City will host two days of conversations on spatial strategies for housing alternatives and non-normative forms of living. Housing Futures will provide a platform to discuss everything from the future of squatting to the rise of new models for cooperative housing, while at the same time rethinking how to document and preserve these spatial, social and political strategies for future generations. Housing Futures aims to contribute to the growing housing movement with new ideas, fresh connections and practical solutions.

Across the globe, cities have been taken hostage by neoliberal urban policies that are putting the fundamental right to housing under pressure. Rotterdam is one of them, as are many other cities in The Netherlands. Once known because of its social, alternative, and affordable housing models, the country is now the site of a rising number of homelessness, evictions, and expulsions of marginalized groups from its city centers, including groups that previously had less issues finding a suited home. In this context, it is fundamental to, once more, pose the question: what opportunities arise when the right to housing rather than the right to property, takes precedence in the transformation of the city?

Since the 1960s, squatters have practiced this philosophy as a form of urban living, reshaping both the city itself and how it has been perceived and theorized. Using subversive spatial tactics instead of master plans and top-down design strategies, squatters appropriate the city and change it from within. Next to tactics of collective resistance practiced by squatting communities over decades, diverse groups and collectives are keeping up the fight for affordable housing by pushing for changes in housing policies and by proposing alternative models for non-normative forms of living.

The quest for recognition of these collectives, their spatial, legal, digital and artistic practices, and their role in the design of the urban fabric, opens up questions of the power relations involved in these processes when the self-organized meet the institutional, and living practices meet the archive, the court, the municipal office. Necessarily, this brings in questions of institutional and non-institutional cooperation and systemic institutional violences. The organizers of these sessions, both institutionally affiliated and independent practitioners, seek specifically to amplify generative approaches, connect initiatives and explore infrastructures for self-organisation that could have a transformative effect on existing and emergent institutions.

Architecture of Appropriation
The weekend follows from the research project Architecture of Appropriation which analyzed six case studies of squatting communities in the Netherlands through architectural drawings, interviews, and archival material. Bringing together the expertise of the squatting movement together with architects, archivists, scholars, and lawyers, the project discussed approaches to the research, archival practices and representation of precarious, nonauthor-based, and often criminalized spatial practices in the institutional framework of an archive and museum. The project has manifested in different public programs, exhibitions and publications, and is also currently presented as part of the exhibition Appropriation as Collective Resistance (on show in Designing the Social at Het Nieuwe Instituut).

Location:
Independent School for the City

Further details will be announced soon