“Minorities” and “Telling the Story” 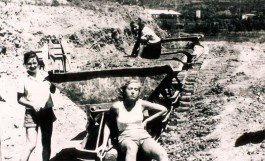 Population growth through different dynamics is leading to rapid urbanisation and a larger and more diverse housing demand on the European continent. This means a huge task for the European New Towns, mostly dating from the 1960s-1980s. They need to reinvent themselves while at the same time they are also becoming of age and the issue of heritage starts coming up. The themes of migration, climate change and inequality (often in conjunction) have become urgent in a matter of years. How can heritage and the character developed over half a century be included in convincing transformation scenarios for the future?

Minorities
The first topic focussed on the unknown histories of minorities in European New Towns to enrich the understanding and the history of these towns and to increase pride, engagement and inclusion of minorities in the present city. New Towns both in the west and east of Europe were built for a new ideal population, that was mostly envisaged as consisting of single white heterosexual families. The New Towns were a highly normative environment with male workers that had families with stay-at-home moms taking care of children. There was little attention at the time for minorities; ethnic or gender minorities were simply non-existent in the narrative of New Towns back then. While this has changed since the seventies, and new pioneers from all over the world brought various religions, ethnicities, and beliefs, this is often not reflected in the (self)image of the new towns. Working together with local universities, the project will unravel and fetch these stories by means of interviews and use them to discuss and exchange with other cities.

Telling the story
Secondly, we focussed on the culture, history, and heritage of New Towns in Europe and the way this can be communicated to a larger audience. Now that most New Towns have celebrated their 50th birthday, they have a history and a specific culture. Some could interpret their relationship with their former ‘mother city’ and its related circumstances. But still, they all have to cope with their negative image to outsiders. By showcasing and communicating their culture and heritage they can probably tackle this persistent judgement. At the same time, they can use their heritage as a basis for future (spatial) transformations. New Towns wish to increase the awareness of their inhabitants that they are living in a place built with ambitions, pride, and aspirations. They also wish to activate their population and become more inclusive cities instead of cities in which the local government is omnipotent and reflects just the majority group. This project wants to initiate the exchange of experiences between New Towns in showcasing the story of their city. What is the (hi)story of the city? What is the difference between the story and marketing? Who’s city is it? Who communicates the story and how? What is the role for museums, magazines, exhibitions, digital platforms?

The discussions and dialogues during the International New Town Day 2021 addressed collective questions, pinpoint common grounds for the Towns and defined possible actions to be undertaken.

15.20 - 15:40 The new town Ilijas, and the changing relationship with the ‘mother-city’ Sarajevo from satellite to suburb with Elsa Turkusic (Senior Teaching Assistant, Department of Architectural Design, Faculty of Architecture, University of Sarajevo Ilijas)

15.40 - 16:00 The role of architectural heritage in the future development of Zoetermeer with Margriet Panman (Heritage and Spatial Quality Advisor municipality Zoetermeer, the Netherlands)

The International New Town Day on 29 November 2021 was an online event. Participants could take part through an online Zoom connection.