A one-week studio exploring strategies for radical greening our cities with Peter Veenstra of Lola Landscape Architects, that took place from 18 - 22 October 2021 in Rotterdam.

Planting trees has become a popular project for local and national governments all around the world to combat climate change and to increase biodiversity. The World Economic Forum recently launched the One Trillion Trees Initiative - a global movement to grow, restore and conserve trees all around the planet. At the same time, the European Commission wants to grow at least 3 billion additional trees by 2030, and the Dutch government has just presented a vision for the future of forests in the Netherlands, aiming for an expansion of 10% in 2030.

While expanding, regenerating and rewilding large natural areas are important strategies to create diverse and healthy carbon-storing ecosystems, there are also many reasons to radically green our urban areas: trees capture CO2 and clean the air, they cool down our cities, they can help regulate ecosystems, they improve our health and give people a sense of well-being. That’s why many cities all around the world are developing and implementing strategies for greening their territory. From Urban Forests at famous landmarks in Paris as a way to frame cultural heritage, to Medellín’s interconnected green corridors. And from Rotterdam’s urban greening projects to the Urban forestry project in Kumasi, Ghana. Trees and other vegetation are added to urban parks, neighbourhood streets, boulevards, gardens, rivers and coastal promenades, wetlands, former industrial sites etcetera.

But not all forests are the same. There are happy forests and sad forests. Productive forests and harmful forests. In fact, many of the initial large-scale forestations incited by ambitious targets have turned into landscapes with low quality and performance. So, the question is: how can we make a valuable forest? How can we use this movement to create better living environments for everyone? And how can we take matters into our own hands and not just sit and way for our governments to act?

Within the context of these large-scale plans for planting billions of trees around the world, this studio focussed on concrete action and looked at what we can do ourselves when it comes to planting trees in Rotterdam. Under the supervision of Peter Veenstra of Lola Landscape Architects and with input from urban forest specialists from all around the world, we have explored the do’s and don’ts of planting trees and took a step in turning Rotterdam into an inhabitable forest. We have questioned what this would mean for the city, and what the limitations are. In line with today’s spirit, the workshop has led to real action: planting trees in Rotterdam.

We have followed an ecological approach and research and used the natural reproductivity of nature. Trees produce seedlings, that can be harvested and replanted. We have examined the potential of this, via digital mapping, on-site documentation, speculative design research and the actual planting of a small urban forest. The studio resulted in an urban forest herbarium, a new forest map of (a part of) Rotterdam, and a physical new forest.  All participants will receive a photo of ‘their’ forest end of 2022.

Peter Veenstra
After studying landschape architecture at Wageningen University, Peter Veenstra co-founded LOLA Landscape Architects in 2006 together with Cees van der Veeken and Eric-Jan Pleijster, with whom he researches and designs spatial transitions of existing cultural landscapes. With thoughtful ideas and targeted interventions, they aim to optimize those landscapes in beautiful, healthy and sustainable places. They have an optimistic and conceptual approach and a fascination for new spatial phenomena and have the ambition to design sublime places that are beautiful, surprising and thriving.

At LOLA Peter leads many design competitions and research projects. He constantly questions the relationship between nature, man and technique. Sensory experiences of light and sound and the sense of orientation are being used to create an experience. Freedom in movement and use is always the starting point, in both metropolitan environments as open nature. Examples are the design for Marstallplatz in Hannover, Naturalispark in Leiden and Star Maze park in Tytsjerk and the installation Composed Nature in Dordrecht and Neerpelt. Peter Veenstra frequently lectures in universities all around the world, and has been part of numerous in jury's and curatorial teams. In 2013 he received the Rotterdam Maaskant Prize for Young Architects. On the occasion he co-wrote the monograph on LOLA titled ‘Lost Landscapes’ together with his partners  Cees van der Veeken and Eric-Jan Pleijster.

Jean-François Gauthier
Jean-François (1988) is a landscape architect and founder of SYLVA Landscape Architecture Urban Forestry. His practice lies at the edge between a fascination for forest ecology systems and artistic experimentation. Using various mixed-media techniques, he aims to create speculative landscape designs that visualize what a forest can look like in the public domain. He graduated from the Amsterdam Academy of Architecture with a Master’s degree in landscape architecture. In his graduation project titled ‘Trees First’, he has conducted research into the system and possibilities of the urban forest; focusing on trees in the city as a starting point for better design of public spaces. He further develops this craftsmanship at SYLVA, as he believes that the environmental challenges of the 21st century ask for a new design language. 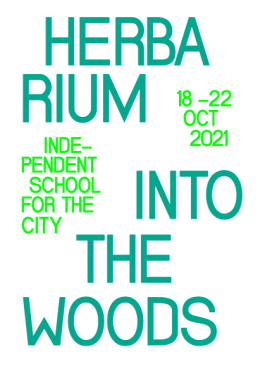 The seedlings we harvested for this studio are all collected in a herbarium publication, which you can view/download here.