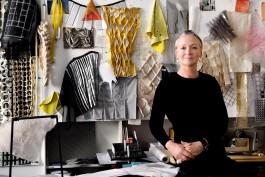 Possibly Holland's most poetic and uncompromising spatial designer Petra Blaisse was our guest at School's Out! #9 on the 29November 2019. Petra and her office Inside/Outside have for decades now provided the cheerful but ultimately dispiriting banality of Dutch Design with an antidote of craft, seriousness, utility and sheer, unadulterated beauty. Her interventions are seemingly humble, insinuating themselves in the fringes and nooks and crannies of buildings and urban projects with gardens, textiles, objects and materials. The designs however undercut, insubordinate, infect and enrich the rough and often schematic ‘projects’, and turn them into real places.
During her talk, Petra Blaisse addressed how the position of her practice and studio, Inside Outside, spins on the axis of interdisciplinary research along a constant interchangeability of context. Known for their site-specific spatial interventions - both inside, outside and in the in-between - Petra explained how each condition and commission demands a unique response. The delicate act of introducing new forms of action and retraction, movements and stories through their projects that connect or respond to the given urban, ecological, technical or social conditions requires the use of methodologies that are as malleable as the open-endings of the final result. From conducting biological and physical experiments in order to understand how living materials change at the hands of time and climate, to analyzing how different traditions and values specific to a culture respond to interventions of designers and architects as “meddling outsiders”, Inside Outside looks for the right motivation behind every project. Thus, their designs introduce reciprocities between people and spaces previously unthinkable.
Petra Blaisse started her career in 1978 at the Stedelijk Museum in Amsterdam, in the Department of Applied Arts. From 1986 onwards, she worked as freelance exhibition designer and won distinction for her installations of architectural works. Gradually her focus shifted to the use of textiles, light and finishes in interior space and, at the same time, to the design of gardens and landscapes. In 1991, she founded Inside Outside - a studio that works in a multitude of creative areas, including textile, landscape and exhibition design. Throughout the years, Inside Outside has collaborated with various architects and designers. Blaisse has lectured and taught extensively in Europe, Asia and the United States. Her work has been included in numerous design and architecture exhibits internationally. In 2000 a solo exhibition on Inside Outside’s work was organized at the Storefront for Art and Architecture in Soho, New York, for which Dutch graphic designer Irma Boom created Blaisse’s first publication, the “Movements, 25%” catalogue. The first monograph on the work of Petra Blaisse / Inside Outside designed by Irma Boom, has been published February 2007 by NAi Publishers and was reprinted by The Monacelli Press, a division of Random House Inc. New York, October 2009.