INEQUALITY IN A SUPERDIVERSE CITY 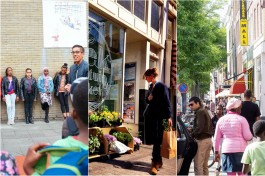 Rotterdam is a member of an international family of cities to which also London, Paris, Los Angeles belong that have earned the title of ‘superdiverse’. Superdiverse means that there is no longer a majority of ‘native Dutch’ people that dominates the community. The ethnic Dutch have become a minority amidst others, the largest minority perhaps, but still a minority. Superdiverse cities like Rotterdam bring with them a next stage in the integration process, where ethnicity no longer is the most important let alone the sole factor with which people define themselves. Instead of the old dividing lines superdiversity seems to create new connections. Not only do ethnicities get mixed, communities also start being based on other factors like religion, profession, sexual orientation or neighborhood. In other words: the simple pie chart of ethnicity becomes mixed up into a collection of overlapping and mixing colors.

Such a transformation is nearly impossible to catch using the conventional bureaucratic and scholarly statistics. To see it we have to go on the streets, in the restaurants, listen to the radio and go on social media. In this course we aim to do just that: to do empirical research in a superdiverse part of Rotterdam with the aim to understand how the city, its facilities and its public space are being used by many different groups of people; to understand what they value in the city, where they spend their time, where they spend their money, where they work and go to school.

This studio is part of our intensive three-month programme on contemporary urbanism 'Dirty Old Town', but can also be taken separately. More info will follow soon.