On the 16 October 2020, The International New Town Institute and the Independent School for the City will host the International online symposium Taking Back Housing! Tickets are available for 15 Euros. 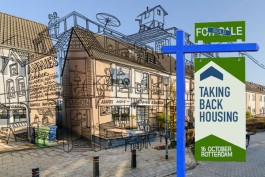 The online event Taking Back Housing! International New Town Day 2020 will consist of an international symposium with lectures and discussions about new initiatives for housing.

In addition to the traditional housing construction of housing corporations and project developers, a large number of new, smaller parties are trying to realize their projects: housing corporations, do-it-yourselfers, former squatters, and developing architects all try to gain development rights and a place at the table. These projects radically challenge conventional planning methods. However, there are many obstacles to overcome, mostly in the institutional unwillingness or inability to deal with non-professionals or with a not-for-profit approach. Who and what is holding back these projects? What can be done about it? During the symposium Taking Back Housing! we bring together examples from the Netherlands and abroad to clearly state the problem and to formulate ways out.

We will start with a problem definition based on examples from independent housing cooperatives in Rotterdam and other places in the Netherlands, investigating what makes it so difficult to realize these projects. During the discussion, we will try to provide answers to questions such as: what is needed for the future implementation of self-organized housing plans and who and what needs to change? What organizational and policy transformations are needed? With the contributions of representatives of banks, developers, architects, activists, and policymakers, we will analyze and question standard working methods and stimulate new developments and experiments.

Arie Lengkeek
Arie Lengkeek works an independent curator and program maker under the name Arie Lengkeek / commongrounds. His motive is to develop new common grounds as training places for the city of tomorrow, integrating cultural values, economic drivers and social fabric. He is one of the initiators of Het Rotterdams Woongenootschap,  and wrote the pamphlet ‘Operatie Wooncoöperatie’ to advocate cooperative housing as the third pillar in a just and inclusive urban development.

Darinka Czischke
Dr Darinka Czischke is Associate Professor at the Faculty of Architecture and the Built Environment, Delft University of Technology. In 2014 Dr Czischke was awarded the Delft Technology Fellowship to develop her research on Collaborative Housing. She is the founder of the Co-Lab Research group at the TU Delft and co-founder of the working group ‘Collaborative Housing’ at the European Network for Housing Research (ENHR). Previously, she worked as Director of World Habitat (2013, formerly Building and Social Housing Foundation, BSHF); Research Director of the European Social Housing Observatory at CECODHAS Housing Europe; and as Research Associate at the LSE Cities Programme, London School of Economics and Political Science. She has published extensively about social, affordable and collaborative housing in comparative international perspective.

Gerard Roemers
Gerard is a co-founder board member at De Warren, the first housing coöperation in Amsterdam that designs and builds its own real-estate. The project aims to realize 36 apartments: sustainable, and at affordable prices. Outside of this personal project, Gerard works as a sustainability consultant at Metabolic. He's been educated in spatial planning as well as environmental sciences and industrial ecology. Within Metabolic Gerard combines these disciplines by specializing in circular urban planning and design. Within De Warren Gerards main focus is on realizing a sustainable building design: the design foresees an energy-neutral, using renewable and circular building materials wherever possible, and providing a place to live for urban flora and fauna as well as the human inhabitants of de Warren.

Han de Wetering
Han van de Wetering is urbanist and architect and founder of the urban design studio “Van de Wetering Atelier für Städtebau” in Zurich. With his office he won many prizes and competitions and is laureate of the Swiss Urbanism Award (“Stadtlandpreis”). He is a leading expert in cooperative housing developments, especially dealing with its contribution to an attractive, open, sustainable city and its integration in new urban planning strategies. He publishes regularly and lectures at various Swiss universities.

Jacqueline Tellinga
Jacqueline Tellinga is a Dutch planner and urbanist who manages experimental urban developments, both large and small scale. Tellinga is a member of the Professional Association of Dutch Urban Designers and Planners (BNSP), the Dutch National Expert Team Housing and of The Right to Build Task Force in the UK. For more than ten years now she worked in various capacities on projects related to the topic of self-building. As the project manager of the Homeruskwartier in Almere with 1.400 individual plots she has been responsible for the largest self-build area in the Netherlands. The latest project being BouwEXPO Tiny Housing.

Laura Weeber
Laura Weeber is an architect and consultant at Urbannerdam. With her architectural firm, she stood at the cradle of the first developments in housing construction, to ever-increasing freedom of choice for buyers and residents in the design of their homes with the project Groeiwwoningen Expo 2001 in Almere. She strives to enrich the city with special residential communities, to provide space for people to create their own living environment, and to make exceptional homes possible for a niche market.

Leonie Andriesse
Leonie Andriesse is an urban planner who has turned into an expert on housing. After working for consultancy agencies for more than seven years, she switched to the municipality of Rotterdam in 2009. Since then, she has been advising the mayor and aldermen of Rotterdam on a wide range of housing issues, ranging from the price segmentation in the urban housing stock (citywide and area-specific), quality of houses in general and for specific interest groups like families and the elderly, the distribution of (public) housing and the development of flexible housing/temporary housing. She recently wrote the revised strategic housing vision 2030 and rules for the relocation of people currently living in houses that are being demolished.  As of March 2020 Leonie has become a member of a special workforce within the municipality that develops a package full of measures to reduce the impact of COVID19 on the Rotterdam housing market.

Lina Hurlin
Lina Hurlin is an activist dedicated to the right to the city and good housing for all. Since 2013 she is active in the German "Mietshäuser Syndikat" a solidarity-network of more than 150 non-profit and deprivatized house projects.

Marc Koehler
Marc Koehler is the founder of Marc Koehler Architects (MKA), a multidisciplinary design agency based in Amsterdam, and initiator of Superlofts. He believes that design has the power to help people create the life of their dreams and allows them to both feel at home and belong to something greater. With the bigger picture in mind, he sees the potential of architecture to harness the flow of nature, people, energy, material and capital, thereby revealing new ways to restore the balance between people and planet. An ongoing MKA-project, Superlofts is a customizable co-living and development model based on modular, prefab and Open Building systems.

Marije Raap
Marije Raap works for the City of Amsterdam, department as programme manager Housing. She is a manager for the programme to enlarge possibilities for Housing cooperatives in Amsterdam. From 2011-2019 she was a member of the self-buid team of the city of Amsterdam. Marije studied Architecture and participated in various projects like researching quality and processes of smallscale urban developments ‘The intermediate size’.

Ninke Happel
As part of the architecture firm Happel Cornelisse Verhoeven, Ninke Happel handles a broad portfolio of public buildings, redevelopments, residential buildings and public interiors. Given the firm’s marked interest in the cultural-historical layering of cities and buildings, most of its projects are located at the interface between old and new. The practice’s approach is one of regenerative synthesis, juxtaposing past and present in such a way that they reinforce one another’s special qualities. The team exist of sixteen master degree architects. Ninke Happel, Floris Cornelisse and Paul Verhoeven lead the practice based on their different but complementary backgrounds. Next to the office, they take part in the architectural debate, they teach in various institutions, give lectures and act as guest critics both at home and abroad.

Piet Vollaard
Piet Vollaard (1955) is educated at TU Delft faculty of Architecture (1984) and works as an architect, architecture critic, urban activist and a promotor/project initiator of nature-inclusive design and urban nature. He has been visiting teacher and lecturer at several architecture schools in the Netherlands, notably TU Delft Faculty of Architecture, School of Architecture Amsterdam, Arnhem and Rotterdam (1985 until present). He was co-founder/director of ArchiNed, the architecture website of the Netherlands (1996-2013)’
He is currently active in and co-founder of The Natural City (urban nature projects, 2012- present) and City in the Making (co-housing and alternative, unconventional programming of vacant urban property 2012 - present).

14:30 - 16:00 - Part 4: Ambitions of Dutch cities
_ Presentation on the Amsterdam Action Plan by Marije Raap (municipality Amsterdam) with reactions by Marc Koehler (Marc Koehler Architects and initiator of the Superlofts project) and Jacqueline Tellinga (Planner and urbanist, project manager of the Homeruskwartier in Almere).
_ Presentation on Rotterdam's policy by Leonie Andriesse (municipality Rotterdam) with reactions by Laura Weeber (Architect and adviser of Urbannerdam) and Peter Kuenzli (Het Rotterdams Woongenootschap).
_ A discussion with speakers and the Zoom-audience.