A renowned course focused on understanding the city through the language of film led by architect, curator and filmmaker Jord den Hollander. Taking place on evenings (online and offline) between 05 Sept - 06 Oct 2022. 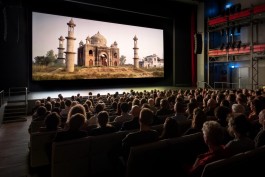 The Film and Architecture Studio has proved itself in the past years as one of the most acclaimed courses on film and architecture in the world. It offers a comprehensive way to use cinematic language as a way to explore the relationship between film, cities and architecture. It is a hands-on studio that focuses on learning and understanding the narrative of filmmaking as a research tool to better understand our urban surroundings. Participants in this course are introduced to the essential elements of filmmaking and learn how to relate these to architecture and the city. The focus of the studio is not so much on the technical aspects of filmmaking and postproduction, but rather on film as a tool to structure your thoughts and to turn your findings into a gripping narrative.

The Film and Architecture Studio is spread over a period of a month, allowing participants to conduct research in their immediate surroundings. While some sessions are organized physically in Rotterdam, we always offer the possibility to attend online for those who cannot make it. Though weekly meetings between 5 September and 6 October 2022, we will exchange ideas and discuss your progress with both the tutors involved as well as other participants in the course.

We will start the first session at the Independent School for the City with a general introduction to the course and a public lecture on Film and Architecture by tutor, curator, and film maker Jord den Hollander. During the weeks that follow, we’ll gather online to discuss our progress, followed by a conversation about the various approaches and ways to move forward. These meetings are combined with two presentations and conversations with a director of photography (DOP) and a filmmaker. We will eventually get together in Rotterdam again for the festive screening of the short movies in a real cinema room, and to attend the opening of the Architecture Film Festival Rotterdam in October.

The studio is open to students and professionals in the fields of architecture, sociology, design, cinematography, and other urban studies. Although it might be useful, the film and architecture studio does not require any advanced knowledge in filmmaking or special equipment like cameras or editing tools. All recording tools are welcome, but a smartphone and laptop work as bare essentials.

Jord den Hollander
After having finished his master’s in archi- tecture at the Technical University of Delft, Jord den Hollander followed a course in scenario writing at the Filmschool in London. Throughout his career he has often combined both disciplines. He has made documentaries about art and architecture, has written and directed internationally acclaimed television series for children about art and science and is curator of the Architecture Film Festival Rotterdam (www.affr.nl), the world’s biggest architecture film festival, which he co-founded in 2002. In addition, he has designed a unique oeuvre that includes an architecture center for children in Almere, a mobile kid’s library, a floating hotel and a tensegrity bicycle bridge.

Hans Christian Post
Hans Christian Post is a writer and filmmaker. Having a PhD in Modern Culture from the university of Copenhagen his main field of research is cultural and urban memory. With Dresden and Berlin as primary cases, he has written extensively on the intertwining of city planning, building preservation, memory, and history politics. Since 2014, he has worked independently as film maker and producer. In 2015, he finished his first documentary, Last Exit Alexanderplatz, which was followed by Whose city? in 2017. The theatre film We are here came out in early 2019, and later that year, he completed Where to with history?, his fourth film to date. This film had it’s Dutch premiere in October at AFFR 2020.

Thomas Kist
Thomas Kist is an internationally renowned director of photography, who has worked together with directors as Theo van Gogh, Steve Buscemi and Stanley Tucci and who has been involved in many documentaries on architecture and the city.

*while the course starts and ends with a physical meeting in Rotterdam, it is also possible to completely participate remotely.

Curious what the participants in the previous Film & Architecture Studio produced? Take a look at the selections of short films below, or check out the results of the 2021 studio, the 2020 studio, or the 2019 edition.

A little square in Rotterdam by Christian Heins

Under Pressure by Yosuke Nakamoto

Memory and space by Shai Alfarhan