The Independent School for the City organizes various public events, addressing topics that responds to current relevant issues in urbanisation, and offers a platform to other organisation dealing with the city. The events are accessible to all 'urban' professionals in Rotterdam and beyond.

SCHOOL's OUT! #20 with jan willem petersen

For this 20th edition of School’s Out! we’ve invited the architect, urban planner, and researcher Jan Willem Petersen, who will talk about his work in Afghanistan. Jan Willem traveled multiple times to this country between 2013 and 2016, where he scrutinized the international reconstruction efforts disguised as a local Afghan, aiming to gain a better understanding on the legacy of the schools, roads, mosques, clinics, government buildings, factories, markets, police stations, prisons and airports initiated by the Netherlands and how the interventions relate to the unruly Afghan reality. This resulted in the report ‘Uruzgan's Legacy: An exploration of the Dutch reconstruction results’ which he presented to the Dutch Chief of Defence, General Tom Middendorp.

On the 24th of September Jan Willem will talk with us about his findings and how he managed to work in the turbulent Afghan context. He will talk about the role of the architect in reconstruction projects and will also reflect on his work based on the current developments in the country. Just like School’s Out! is supposed to be, we’ll wrap up the evening with a short movie, handpicked by AFFR curator Jord den Hollander, followed by drinks and tunes. Make sure to get you tickets fast. We only have 25 places!* 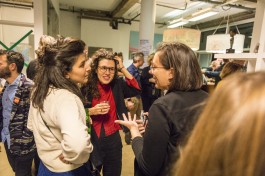 SCHOOL's OUT! #19 with Adriaan Geuze

For the 19th edition of School’s Out! we invited one of the most influential and famous landscape architects of the Netherlands: Adriaan Geuze. Adriaan talked about one of his lasted projects: the Houston Botanic Garden (Texas, USA) - a former golf course that was turned into a 132 acres park of ecosystems, horticultural displays and walking trails. In his presentation Adriaan did not just take us along the design process - that went from masterplanning the site, to designing the vegetation, the fences, furniture, fountains, and even the ceramic tiles on one of the walls - but he also talked about the process of winning the design competition, his visions for the place, his contact with the client - that consisted of a small constituency of local Houstonians, fundraising dinners and how he operates in a multidisciplinary team of planting and soil experts, structural Engineers, and architects. The result is a stunning project, an oasis of learning, discovery and horticultural beauty. Outdoor gallery spaces display a collection of tropical, sub-tropical, and arid plants from around the world to showcase the biodiversity that thrives along the Texas Gulf Coast. The intent of the site design is to seek balance in all aspects, from planting and soils, through topography and materials—the careful juxtaposition of order and chaos that is at the heart of enduring gardens. The now completed 1st phase of the project includes the completion of the Playground Lagoon, Global Garden, Alcoves, Welcome pavilion boulevard and the Edible Garden.

25 October 2019
School's Out! #8 with Alfredo Brillembourg and WLDRF

3 October 2019
New Territorial Narratives - Symposium on  photography as a research tool. With Urban Reports, Theo Baart and the Nederlands Fotomuseum.

11 July 2019
Book presentation: City of Comings and Goings by Crimson

11 April 2019
‘Dutch Designs for a Cycling Country’, Presentation of results organised by Board of Government Advisors