THE POLDER OF BABEL

The Polder of Babel - A Superdiverse City in the Anthropocene, is a ongoing community of learning about the urban development of Rotterdam. By bringing together civil servants, planners and researchers, the community aims to be a place for inspiration, reflection and the development of new ideas that could help Rotterdam and other cities in the Netherlands to move forward with respect to today's urban challenges. 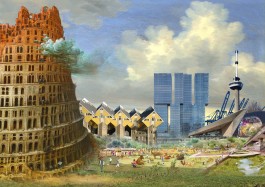 The Netherlands and in particular the port city of Rotterdam has an international reputation for the invention and development of new landscapes and urban areas. This development has always relied on a sense of collective urgency and pragmatism in the face of the direst of circumstances. Today Rotterdam – like many cities around the world – is struggling to find a new balance in ‘living together’ between people and with nature. While on the one hand Rotterdam has proudly become the most diverse city of the Netherlands with a fantastic bazaar of languages, cultures and identities, it also has to cope with large differences in income, housing situation and development opportunities between the various groups in the city. Simultaneously it wants to be a green and resilient city while it still very much depends on its fossil-based industry and economy. In this learning community we will explore how a city that is as diverse and confusing as the biblical Babel, can create the collective sense of urgency needed to build a new, green future for all?

Following the approach of the Independent School for the City as an interdisciplinary meeting place and knowledge exchange center for (future) urban professionals, the community of learning does on the one hand scrutinise the city through the lens of the Anthropocene, the era in which the Earth’s climate and atmosphere are strongly influenced by human activity. On the other hand, Rotterdam is examined as a Superdiverse city, which means a city of which more than half of its population consists of a diverse mix of ethnicities.

The project first started in 2020 with a preliminary study in which the topics of the Anthropocene and Superdiversity were further explored and geared to the city of Rotterdam through desk research, interviews, the analysis of illustrative projects and (online) conversations. The findings of this research were compiled into a reader that formed the input of four sessions with a group of fifteen employees of the municipality of Rotterdam selected from various departments: urban development, urban management, social development and the engineering bureau. Focusing through the lens of the Anthropocene and Superdiversity we worked on different cases in Rotterdam in order to ground these comprehensive and sometimes unclear topics in the reality of Rotterdam.

During the first session on the 17 and 18 June 2021 we looked at the concept of the Anthropocene and tried to relate this to concrete projects and the development of policy within the municipality of Rotterdam. After a morning of introductions and conversations on the theory of the Anthropocene, the participants worked on a case in Het Lage Land – literally one of the lowest locations of Rotterdam. At the end of the last day, the results were presented to the invited critics: landscape architect Dirk Sijmons and Director of Natuur & Milieu Majolein Demmers. The second session took place in September and was programmed around a visit to the Venice Architecture Biennale as part of the Pavilion Days. We took part in various public activities and visited the exhibition in order to relate the presented work to the reality of Rotterdam. In October we organised the third block of the programme: a two-day session about Superdiversity, focusing on the Delfshaven neighbourhood and specifically the area around the Schiedamseweg. For this we worked together with writer, director, performer and programme maker Malique Mohamud of Concrete Blossom who started the Niteshop – a centre for street culture in the neighbourhood.

In April 2022, we wraped up this first part of the learning community with an event in which the participants presented their findings to their colleagues at the municipality of Rotterdam. We are currently working on a follow-up series of events. Stay tuned!

The Polder of Babel was initiated in 2020 as a parallel programme to the Dutch contribution to the 17th Venice Biennale of Architecture, in which the question “How will we live together?” as posed by Biennale curator Hashim Sarkis and the counter-question “Who is we?” which is central to the Dutch contribution, was connected to the urban development of Rotterdam. The Polder of Babel was initially developed at the request of Het Nieuwe Instituut, commissioner of the Dutch pavilion, and the municipality of Rotterdam.