The Independent School for the City is located in the heart of Rotterdam (NL), next to the Central Station in Rotterdam Central District - East. Our neighbours include Het Schieblock, Annabel, Biergarten, Roodkapje, Burgertrut, De Dépendance, Opperclaes, OMI and AFFR. The school is situated in a wonderful modernist building, by the illustrious Rotterdam architect Hugh Maaskant which was originally designed in 1955 for the Boekman firm and served as an office building, conference center and cafe-restaurant.

The Independent School for the City is located in the heart of Rotterdam, just next to the Central Station. The School provides spaces for external parties to organize small-scale creative and corporate events such as brainstorming sessions, workshops and (book and film) presentations. The School’s auditorium can seat around 100 people and offers professional AV and catering options.

Events that have taken place recently:

Interested in organizing an event and looking for a cool space with a great view? Send your email to info@schoolforthecity.nl

The area has recently experienced some exciting new developments, having been rescued from demolition and development during the financial crisis, and since 2010, in a state of temporality and uncertainty about future plans, the empty buildings have become occupied by all manner of young entrepreneurs and creatives. These range from innovative architecture and design bureaus, to businesses in catering and entertainment such as DakAkker, the largest open-air roof farm in the Netherlands, the Biergarten and music venue Annabel which have become some of the most popular venues in the city. This “urban labratory” has developed into a fertile environment and cultural hub where small businesses are flourishing. The block and surrounding areas are a locus for experimental urban interventions due to this ‘temporality’ and the short-term initiatives of the occupants. There is the Schieblock, in the old Nillmij office building that has been converted to low rent studios for creatives and semi-public spaces. Running through it is the Luchtsingel pedestrian bridge, created by ZUS through crowdfunding, and connecting the previously isolated Schiekadeblock in Rotterdam-Central with Rotterdam-Noord, spanning over the nearby motorways and railways. The bridge then joins up with the Hofbogen railway viaduct, which was redeveloped under supervision of Crimson. A monument that cuts through 2km of the northern city and is bringing new life to this stretch of Rotterdam. This space has attracted a wide range of thinkers and makers of the city to exchange and formulate new ideas. The Independent School sees our integration in this community as a valuable resource and the perfect atmosphere in which to study the city, and we hope all who join us here will too.

ABOUT ROTTERDAM
Rotterdam is a young and dynamic port city, internationally renowned for its innovative drive, unpolished charm and its distinct character. A fascinating place to study because of its rich history of architecture and urban planning, and the varied transformations that are now occurring across its rapidly changing landscape. The Independent School for the City is strongly rooted within the city of Rotterdam and within more than a century of architectural and urban renewal at an international level, from Michiel Brinkmans' Justus van Effen block in Spangen via the Lijnbaan by Jo van den Broek and Jaap Bakema up to OMA’s De Rotterdam and MVRDV’s Markthal. To understand Rotterdam, it is important to recognize that it is not a city that excels through coherence, harmony or even the beauty of its architecture. It is special because of its experimental nature and the fact that things are being built here that can only happen elsewhere much later. This has to do with the concentration of architects in Rotterdam, but especially with the extraordinary challenges that Rotterdam has always posed to architects and urban planners.

The hustling and shocking history of the city, with the port as a lifeline and a jamming station at the same time, with the bombing during World War II and the radical reconstruction after the war, and with the city as an 'arrival city' for crowds of labour migrants from regions as exotic as Brabant and China, makes Rotterdam a habitat where innovation is the 'default position'. Due to the intensity of its changes and the sharpness of its contrasts, Rotterdam is a city where experimentation can and should be done. This makes it a breeding ground for innovation, not only for architects and urban planners, but also for sociologists, historians, visual artists, writers, economists and administrators.

Rotterdam is a city under the influence of globalization, migration, (super) diversity like no other. Climate change, refugee crises, crime and economic fluctuations are very direct and tangible in our city. The situation in the world can be read on every Rotterdam street. Knowing how to read, handle and even predict the effects of global trends at a local level is therefore an important innovation agenda for our school. This city is a confluence of the many quintessential case studies that students of the modern urban environment must consider and assess. Those that study the diverse built environment of Rotterdam will find a microcosm of some of the more challenging scenarios that will be applicable to cities worldwide in the coming decades.

Rotterdam is also a "gateway". Through the port, the universities, the many architectural firms and the open, relatively affordable city space, new Rotterdammers are constantly being created, and the connecting lines with cities around the world are open. Rotterdam is a laboratory for the School. In Rotterdam, things can be researched, designed and developed that could be of interest to the rest of the world, because in Rotterdam we can find situations that are often related to cities in very different parts of the world. It is for these reasons that the Independent School for the City takes the city of Rotterdam, in all its complexity, as the point of departure for study, with the goal of stimulating and inspiring a new generation of urbanists to apply their creativity to finding new solutions for the city. 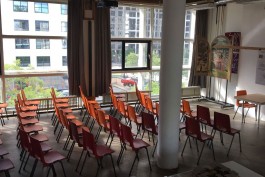 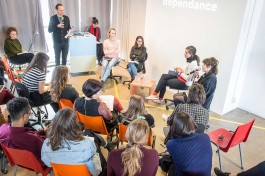 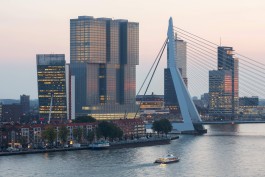