A three-day workshop on the principles of weaving as a metaphor for urban planning, for architecture and urbanism. 10, 11 and 12 December 2021. 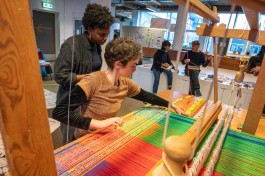 From the beginning of civilization, weaving has played a cultural and artistic role in societies worldwide. Also the economic and scientific influence of the design and technology of looms has been significant: more than two centuries ago, the first punch cards were used on looms, which can rightfully be seen as the prerunners of the computer and formed the basis for the industrial revolution. Weaving is far more than a hobby and it certainly isn’t dull or prissy.

Throwing away your old garments, clothing or fabric is something of the past! These clothes from the attic that date from another period in your life, the worn shirts your ex-lover left behind or just the silly purchases you made and which haven’t left the closet since: everything that creates a meaningful story, an interesting pattern or just a beautiful colour scheme was the perfect starting material for this workshop.

This course offered the participants an exploration into the multiple meanings of weaving on a traditional Finnish weaving loom. It was a communal journey for which the Independent School for the City had teamed up with visual artists Bart Gorter and Ernst van der Hoeven, to understand the principles of weaving and to discover it as a metaphor for urban planning, for architecture and storytelling, for the computer, for the landscape and many more things. The course resulted in one large rug, collectively woven by the participants. 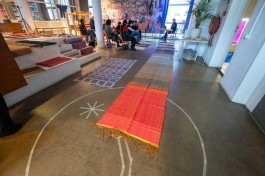 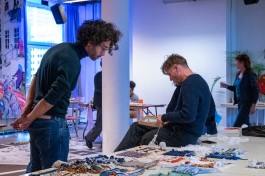 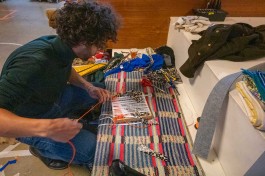 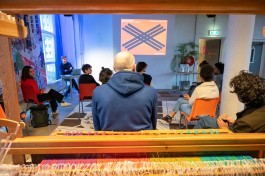 Over a period of only 3 full days, we introduced the participants to all the ins and outs of weaving. After an introduction and a weaving trial on a small loom, we made a collective design for a rug and worked on a traditional Finnish weaving loom. During the process the participants were presented with all the functional elements of weaving: the beam, the reed, the heddle, the slay and the treadle. After one day of individually weaving under guidance, the participants continued weaving to extend the rug. Eventually we freed the rug collectively and discussed the results.

Bart Gorter
Bart Gorter is a visual artist based in Rotterdam, who has worked in different media, mainly photography, weaving and ceramics. In 2012-2013 he made the series ‘Family Ties’, consisting of long rugs made out textiles from his parental house; in 2016 he cooperated with Ernst van der Hoeven on the project of a commissioned rug for the Radboud Hospital in Nijmegen using hospital fabrics, to connect to the history of the hospital; recently he produced a series of rugs using heritage textiles.

Ernst van der Hoeven
Ernst van der Hoeven was trained as an architectural historian and landscape architect and was a founding partner (1994-2004) of Crimson. He designs landscapes, organizes exhibitions and creates works of art for the public domain with an emphasis on the reuse of historical heritage. In 2015 van der Hoeven co-founded MacGuffin Magazine, a design and crafts bi-annual with each issue based around a single object.

10 December, 14:00 - 18:00
Step 1. What is weaving? Introductory lecture by Ernst van der Hoeven and Bart Gorter. Looking at various textiles in an attempt to understand material and structure, the vertical warp and horizontal weft, the raw material of the fabric, the fringes, the knots etc. The principles experimented on a small, individual loom (31x31 cm) and learned how a thread can become the warp and the warp become the weft. Or how a simple wooden frame can function as a window of thoughts. Making of a trial weaving on each individual’s small loom.

11 December, 10:00 - 18:00
Step 2. The loom - The 1.20 meters wide loom is a sturdy device, an ingenious lever mechanism, and a 3-dimensional puzzle in itself. The elements of the loom are explained: the beam, the reed, the heddle, the slay and the treadle. When weaving a rug the warp is an unchangeable given; the weft on the other hand is free to change. The participants learned how to prepare the recycled fabrics to function as warp threads and discuss the consequences of various materials. Collectively, the group made a first design of the rug. The working of the loom was explained and each participant started the actual weaving.

12 December, 10:00 - 18:00
Step 3. A cadavre exquis - The participants  experienced the impact of the weft on the fabric: how every thread opens a new horizon. The first design for the rug was evaluated and slightly modified. While each participant worked individually, the results, tips, tricks and insights were collectively shared.

12 - 24 December
Weaving - during this period, the participants were welcome to keep on weaving until the end of the warp. After a month we collectively gathered to free the rug from the loom and discuss the result.