School's Out! #13 with CARLIJN KINGMA

Live from the School studio, Carlijn Kingma took us on Friday 27 November 2020, on a tour through her incredibly detailed utopian maps. For centuries humankind has been making maps to navigate an increasingly complex world. Carlijn considers herself a cartographer of society. With maps of worlds of thought, she investigates the often-invisible structures, mechanisms, and organizations that determine how we got here, and show us where we can go. The maps full of metaphors and symbolism are an invitation to wonder about and deepen socio-political histories, human ambitions, and the great ideas of past and present.

Carlijn uses the metaphorical language of architecture - towers and tunnels, squares and silos, bridges, and mazes - to help build a world of thought. Trained as an architect, she steps into a long tradition where floor plans and architectural perspectives are used to design utopias. In contrast to traditional, seemingly objective maps, Carlijn’s cartographies emphasize the subjectivity of imagination - not as a final image but as inspiration. By mapping out her own research she invites you to wander through these worlds of thought, follow historical paths, and explore possible scenarios for the future. Carlijn works from the conviction that dialogue between science and art is crucial because they enrich each other's insights, which can then be expressed in multiple languages and forms. She works closely with writers, scientists, and experts by experience. The maps emphasize the need to combine different perspectives.

During School’s Out! #13 Carlijn Kingma, was interviewed by Piet Vollaard (City in the Making) and Michelle Provoost (Independent School for the City).

About Carlijn Kingma
Carlijn Kingma (1991) graduated from TU Delft at the faculty of Architecture but considers herself a cartographer of society. She graduated with an animated film that moved through fifty of her drawings, ultimately rewarding her with a 10. The project was also honored with the New Babylon Award. As a result, her work was on display at the Kunstmuseum Den Haag. In 2018 Kingma won the Architecture Drawing Prize in the category of hand-drawing. Because of this prize, she was allowed to exhibit her drawings in the Sir John Soane's Museum in London. For her latest work, The Fabric of Mankind, she collaborated with historian Rutger Bregman, author of the book ‘de meeste mensen deugen’. An overview of her work is currently on display at Rijksmuseum Twenthe. 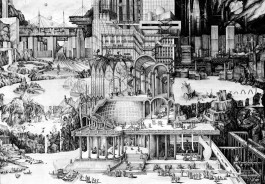